Do men exaggerate the size of their penis?


We could then take the average of both answers to see once and for all if there was an exaggeration in size. In addition we could take into account countries to see how average penis size varied around the world and which men (if any) were honest or even modest!

Here are the results from a total survey size of 1,715 people, 953 males and 762 females.
Sizes stated are in inches. Global results include countries other than those listed individually.

Check out or visual infographic that shows all the data with the aid of a phallic vegetable. Grab the code below if you would like add this to your own blogs and sites.

Cut and paste the following code to add our penis size exaggeration infographic to your website or blog.

Globally men claim to have an erect penis length of 7 inches but the females claim 6.61 inches making a global exaggeration of 5.6% if we assume the females are to be believed. But where the results get really interesting is the variation between countries.

Canada: Where women are happy and men don’t lie
The women claim their men have the longest penis length at an average size of 6.95 inches. The Canadian men are also modest and claim to have an average size less than the women are suggesting. It suggests when men know they are topping the league tables there is really no reason to lie, they may even be under estimating to make the rest of the world feel better about themselves. Congratulations to Canada.

United Kingdom: Where men always come second
The level of exaggeration of British men is a modest 3.6% and the women suggest their men are the second biggest. Like most things in the UK, never winning, but never the worst, just solid and dependable!

United States: ‘The Land of the Fibbers and the Home of the Bravado’
The America men claim to have the largest penis length in the world, or at least the countries within our survey. He is claiming an average length of 7.24 inches but she says exactly the same size as that of the British. The lying is to the magnitude of 8.3% which equates to adding more than half an inch.

India: Good Karma (sutra)
The most modest men in the world? The men in India are just too honest for their own good. Indian women suggest their men are 3.8% bigger than they claim they are.

Australia: Sex, lies and measuring tape
The Australian men, according to their women are really not packing that much ‘down under’. The women are claiming an average size of 5.85 inches and the men are suggesting 7.09 inches. That makes the exaggeration a whopping 17.5%. Are the women just too mean? Are the men holding the ruler the wrong way around?

Let’s now look at where the exaggeration really occurs by placing the global results under the microscope. The chart below shows the percentage occurrence of different penis length from a male and female perspective. Where the male and female lines are close to each other means there is little need to lie or exaggerate, conversely, where the lines separate is where the deceit occurs. 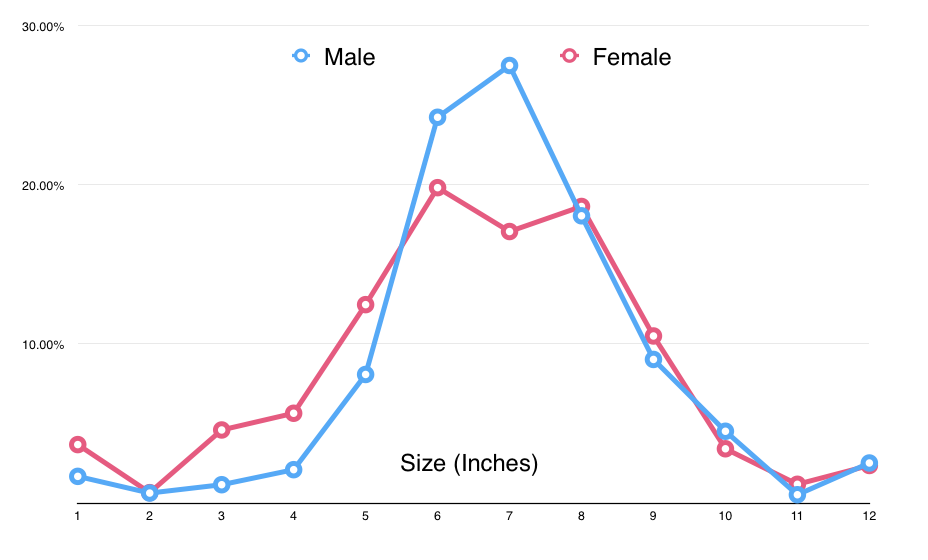 When a man has a length of 8 inches or more it would suggest he has sufficient confidence in his size that he tells the truth. Whereas, men below 5.5 inches lack that confidence and exaggerate their size.

The other interesting feature of this chart is the relative rareity of of the 7 inch penis. Where are they all? This is explained when looking at the UK and USA results in more detail. US women are seeing more 8 inch penises where as UK women are seeing more 6 inchers. The keen eyed readers may then question why the average sizes for both regions is exactly the same? This is answered by the total number of super large penises. UK men and women are claiming / seeing more 12 inch penises than those in the US.

Note: Increases is distribution are expected at 1 and 12 inches as the survey did not offer an option to select less than 1 inch and more than 12.

If you ask a man the size of their penis in general you should subtract 5.6% off the total length, mathematically speaking, of course! But if he claims to be 8 inches or more then you can cancel that call to trade descriptions or better business bureau.

If you are looking for a monstrous sized penis then you should focus your efforts on UK men as 1 in 20 will have enough inches to need a bigger ruler.

If you want to play it safe and go for a good all round size and infallible honestly then Canada is the country for you and avoid the Americas or Australians who think lying increases your size like Pinocchio.

Sex and relationship report:
Detailed stats of how sexual interests vary between the ages of 18 to 60.
Share this article