Men & Women: Who deceives the most?

45,526 people across the globe were surveyed to determine the real differences between men and women. Today you will find out which gender is the most ethical. Which countries have the best or worst behaved people. But before we get into the statistics, sit back and enjoy this shocking short story which is based on our international results. 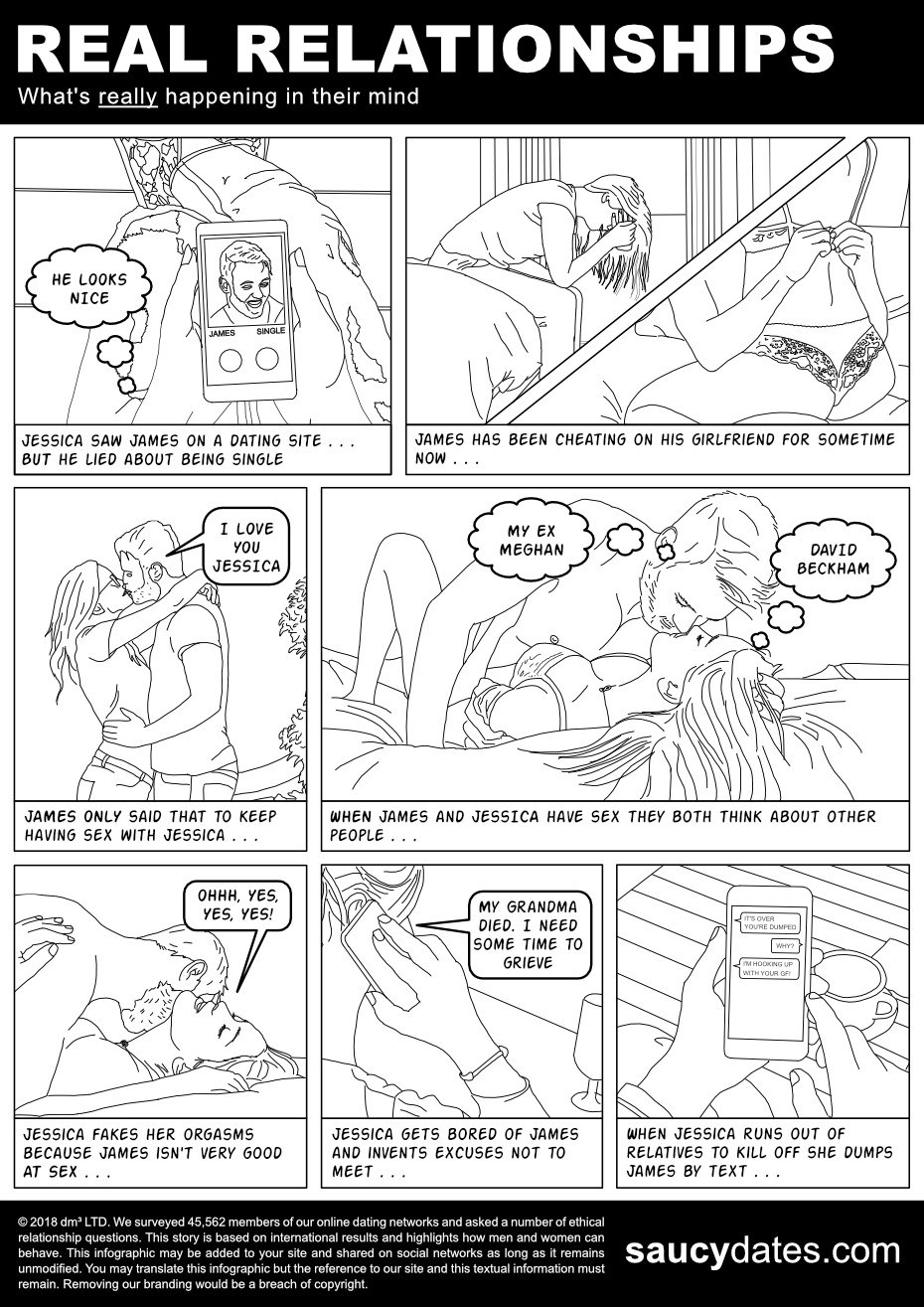 Copy and paste the following code to add our real relationship infographic to your website or blog.

Now you’re up to speed with a general overview of what can really happen, here are more detailed results. There are some countries that are far worse than our short story of James and Jessica. In some countries the guys don’t stand a chance! You may have also been the victim of some of our findings, or you may be guilty yourself!

The table the follows shows the results for all the questions we asked:
Other countries included in international results which are not listed. M = Male, F = Female. Results shown are % of people who said yes.

Made up excuses to avoid a date

Women are the least ethical gender when it comes to getting out of date. Internationally, 41% of women have lied to get out of date v.s. 33% of men.

South African, British and Australia women are the worst offenders who are all close to the 50% mark. Statically speaking, if you have dated two people from these counties, one of them had the potential to lie to you!

Indian men and Dutch women are the most honest and will tell it to you straight. Great, unless you don’t want to hear what they really think.

These are the top ‘made up’ excuses from men and women for avoiding a date. Have you had someone tell you any of these?


Male, 39, Santa Maria, USA: I told her that I was going to Iceland on a research mission.
Male, 46, Whittier, USA: I was dying!
Male, 35, Stratford, UK: Got called into work as my colleague was having a baby.
Female, 21, Bloomsbury, USA: I can’t, I have (insert family thing here)!

Dumped someone via a text

With the exception of South Africa (only just) women are more likely to end a relationship by sending a text message. Men are still very traditional and think it should be done in person. French women top the charts with 1 in 2 ending it via text.
Female, 24, UK, Middlesbrough: I dumped him via text and told him he was shit in bed.
Female, 29, USA, Holly: It happened to me. Basically he said he really cared about me just not the way I wanted him to.
Male, 31, USA, Tallahassee: Long term relationship ended suddenly and while we were working it out, she decided to tell me 'I have a date' via text!

Lied on a dating profile

The surprise result was that most people don’t lie on a dating profile with 20% of men and 18% women saying they have. Some of the lies are justified and are done for safety purposes, so the number of people trying to deceive is even lower.

Safety lies
Both genders admit to making up a new name or a different location citing the reason that it’s done for privacy / safety. For example:

Male, 40 Canada, Calgary: My name. It's very distinct and recognised quickly. There’re not many of me around!

At Saucy Dates we recommend that our members use a pseudonym and an email address that is not related to work or other personal information.

Relationship status
Both women and men are using dating sites to cheat but women are not lying about it. They write in their profiles that they are attached and need to be discrete. Where as the men just say there’re single!

Other lies
The remaining popular lies are mainly carried out by men, they include; pretending to be rich, being taller, weighing less and age. Older men and claiming to be younger and younger claiming to be older.

Male, 22, France, Angers: I lied about my age to appear older to date older women.
Male 25, USA, Redding: I lied about being 21 when I was only 18 so I could get the date.
Female, 49, USA, Reno: I may not expose all my sexual interests so I don't technically lie. But I do want more than what my profile says!

Men
Men are faking it for two main reasons. They want it to be over quickly or they cannot orgasm but don’t want the stigma of not finishing the job.

Male, 46, UK, Shoreham-by-Sea: I faked it because I wanted to sleep!
Male, 19, UK, Wakefield: I was wearing a condom and my ex wanted sex at three in the morning. Five minutes later I faked it, threw it straight away and that was that.
Male, 29, UK, Belfast: I got fed up with doing all the work so I just said I came.
Male, 18, USA, Saint Helen: I have faked an orgasm. I wasn't really into her, but I really felt bad saying no. I just wanted it to be over.
Male, 29, USA, Olmsted: Half way through my dick started going soft. So I acted like I busted a nut!

Females
Women are faking it to make their partner feel better or to get them to speed up!

Cheated on a partner

Internationally there is not much between men and women when it comes to cheating on a partner. Cheaters are likely to attract other cheaters so it comes as no surprise the numbers are similar with 1 in 3 people admitting they have cheated.

United Kingdom, India, Canada and Australia are the counties where you will find women cheating more than men, with Australian women the worst at 39%. The men in South Africa top the male cheating charts.

Female, 40, USA, Roseville: I was not getting the attention I needed when the relationship went long term. I had to get it from somewhere. I waited a long time and stayed loyal as long as possible.
Female, 23, Australia, Sydney: I cheated because the sex was shit!
Male, 23, UK, Bridgend: I have cheated when I found proof she was cheating on me. I have only done it once.

A lot of respondents who said they had cheated did so as they were not sexuality satisfied with their partner. In addition, when someone found out they were being cheated on, they were also driven to cheating to level the score!

Thought of someone else during sex

Globally, 51% of men and 47% of women own up to thinking about someone else during sex. Drilling down by country, Australian and British women are the worst and out imagine their male lovers. British and American men think about other people the most in the male results. In the United Kingdom and Australia it's likely there will be couples who will both be thinking about different people when there are having sex!


Female, 26, USA, Minneapolis: Yes! I think about other people, a few celebrities. Ian Somerhalder, Zac Efron.
Female, 27, USA, Marion: I thought about having someone with a huge dick who could actually make me orgasm.
Female, 22, Sri Lanka: I think about the guy with the biggest I've had, which was a 9 inches and a massive girth. He wasn't the most caring/attentive guy, but when he was in me, thrusting away, there was just nothing else like it!

Saying, ‘I love you’ when you don't

1:3 men and women have said those 3 little words and lied, that blushed look when they say it is guilt! In most countries it’s the men who say “I love you” more when they don’t, apart from the United Kingdom, India and Australia.

Why men lie and say, I love you

Why women lie and say I love you


Female, 18, Lithuania : I did once, but it was a crush and I wasn’t in love and I didn’t know what love meant at that time.
Female, 18, USA, Cedar Rapids: I felt pressured to do so.
Female, 21, USA Port Edwards: I've done it because they were madly in love with me and I hate breaking someones heart.

Some men are lying to their advantage to get sex but generally both genders are lying to avoid hurting someone's feelings. May be in the long run that’s not a great idea even through there was no malice intended.

We hope you don’t end up with a relationship like our short story of James and Jessica. May be our in-depth research will help you to be more aware of what is really going on in the head of your partner? Our best advice is to talk openly to your partner and . . . . . . . be very careful if you date an Australia woman or a South African man!
Share this article