How long does sex last?

What started out to be a comparison survey of how much men from different counties exaggerate their bedroom performance became one of the most scientific studies at Saucy Dates to date. We asked these questions to 3,836 people.

The questions were asked to males and females. When we run a survey a huge amount of data is collected but it's not apparent what the results will be until processed. The results were a real surprise.

We compared the responses from males and females, both globally and per country to see any differences in the average results. Most fell within a few seconds of each other. The men were honest, or at least the females exaggerated as much as the men. This helped us gain some level of confidence in our data.

With a vast array of results we then decided to see if there were any patterns with age and . . . bingo, we had stumbled upon some interesting results. So this is what we discovered.

Let’s kick off with the infographic as that will give you a lot of the data very quickly. 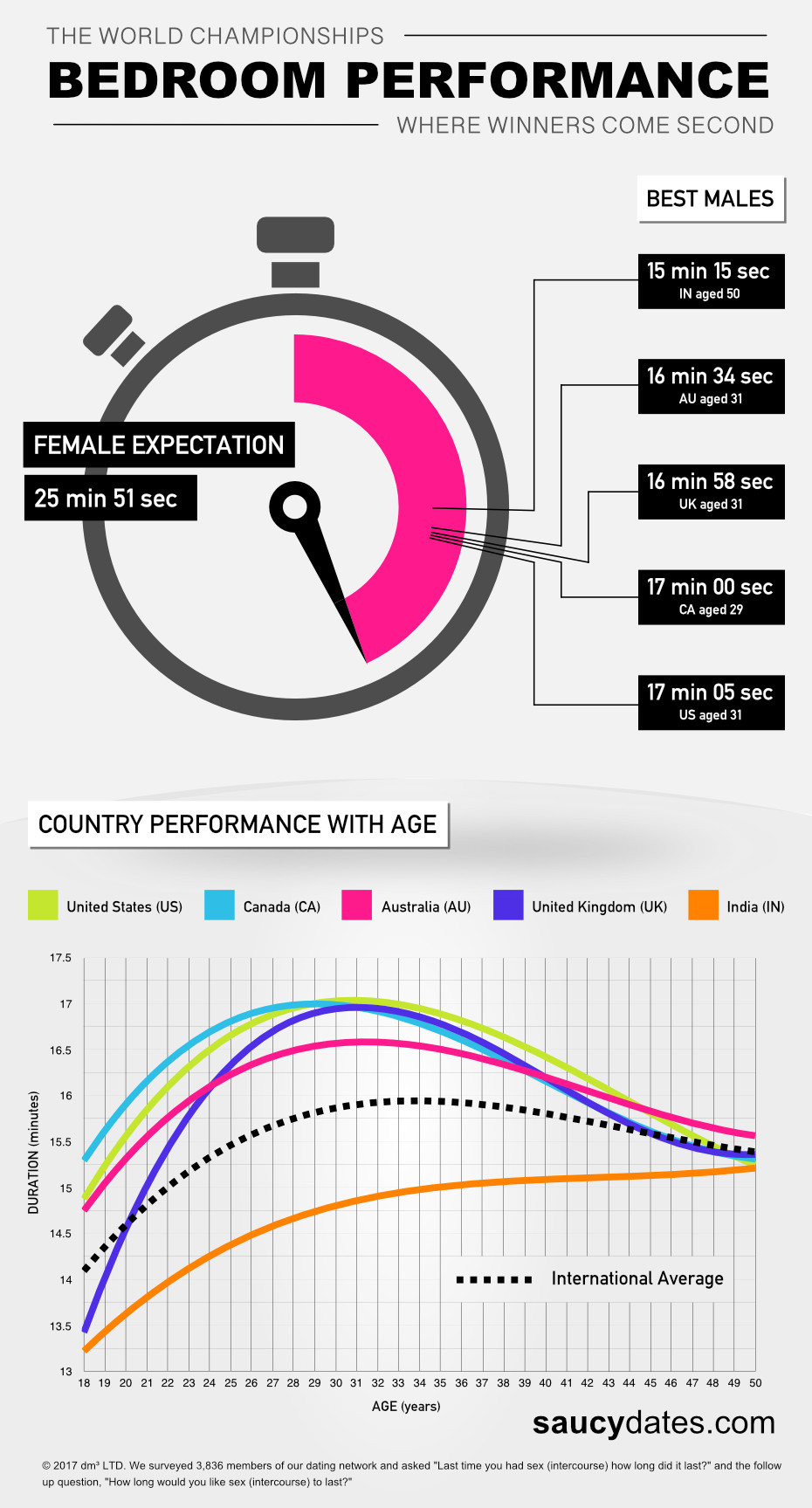 Copy and paste the following code to add our bedroom performance (how long does sex last) infographic to your website or blog.

Global disappointment
The bad news for the entire planet is the average man in any country and of any age cannot get close to hers or his ideal duration. There will be exceptions that do, but on average it’s a disappointment for all. Both men and women are not reaching the duration they both desire.

Peak performance
Globally, there's a noticeable trend in intercourse duration that increase with age and then later decreases. You can see this trend repeated for most countries.

United States
Wow, the guys in the USA have more staying power than any other nation and are well above the international average for almost the entire age range. At this point it’s worth mentioning that Saucy Dates is a UK company and the researcher of this post is also from the UK so there is no bias in the representation of the data (unfortunately).

Canada
The Canadians are very close the America men and out perform everyone else until aged 28. They are also well above the international average.

Australia
A good solid performance from Australian men. They are above the international average across the entire surveyed age range. Aged 45 and above they are the best performers in the world.

United Kingdom
The men from the UK are not so good at a younger age but soon improve. At the age of twenty they are average. In their early thirties they are up with the best.

India
Unfortunately (for Indian women) Indian men are below the international average for the entire age ranged surveyed. The trend in India is different to other regions and their men get better and better with age. By aged 50 they are very close to the rest of the world.

Other countries
The international average includes the above countries plus many more. Data ranges for other countries were not included as the volume of data wasn’t sufficient to produce a reliable trend line.

Countries: Why is there a difference?

Here are some thoughts and discussion points on why there could be a difference between countries and ages.

Anatomical differences
There’s some anecdotal evidence to imply that Indian women may have a smaller vigina. Could this make it harder for the men to perform?

Circumcision
The United States, Canada and Australia are all above the international average when it comes to intercourse duration (at younger ages) and all have a preference between 20% - 80% for circumcision. Whereas the UK and India have circumcision rates below 20% (source https://en.wikipedia.org/wiki/Prevalence_of_circumcision). Could the reduced sensitivity of circumcision improve duration?

Experience
The United States, Canada, Australia and the United Kingdom tend to have a more relaxed attitude to casual sex than India. With more sexual partners on average, could experience influence the results?

Age: Why is there a difference?

Anatomical differences
Are men improving in their thirties as result of having children with their partners? The woman’s viginal tightness could vary in a way that matches the performance trends shown.

Experience
Do couples simply get better at sex with age?

Effort
Do couples in their thirties try harder and make more of an effort to satisfy each other?

Whatever the reasons there’s a noticeable difference in how long sexual intercourse lasts dependant on age and country. For most regions men in their thirties perform the best, 18 year olds are the worst and older men are somewhere in between. Unfortunately, both males and female are disappointed with intercourse duration.

Responses for duration ranged from less than a minute to an hour. Our best advice for everyone is to enjoy the time that it does last and if it’s over too soon then go for a second round. May be we need a follow up study on male recovery rates and frequency of sessions? Watch this space!