How far would a man travel for sex?

Some men are really willing to put the effort in for sex!

How far would you travel to get laid by a sexy woman from Saucydates.com?

The survey question was a definite shag (sex), not just a date. A high percentage of men were only willing to travel between 10 and 50 miles. In the UK 33% of men would only be willing to travel 10 miles and according to the UK Census this is about the same as the average distance people commute to work. Therefore, 1 in 3 men would put as much effort going to work as they would for some hot bedroom action! What does this tell you about UK men? Are they very focused on work? Do they like work more than sex?

33% of UK men would travel further to work than for sex!

As the distance travelled increases the number of men willing to travel decreases as you would except, especially when you reach 1000 miles. However, globally there is an increase when the distance becomes sufficient that the mode of transport would likely become a train.

Globally, 6.1% of men would travel more than 1000 miles which really becomes international travel. Factor in flight tickets, hotels, shuttle transfers and the cost of the date this becomes a serious commitment.

1 in 15 men would travel internationally for sex!

We have created two infographics, one for British men, the other for American men. Our survey data is shown graphically by different types of travel tickets and road signs.

Embed the British infographic on your site

Cut and paste the following code to add our 'travel for sex GB' infographic to your website or blog.

Embed the American infographic on your site

Cut and paste the following code to add our 'travel for sex USA' infographic to your website or blog.

Men who are prepared to travel a bit further than others really increase their chance of getting laid online. Between the UK and USA, men are willing to travel similar distances. If budgets are not an issue then men setting their sights on a long distance fling can really make it a trip to remember. A date in Paris, New York or even Las Vegas. In Vegas you stand the chance of getting lucky in more ways than one!

The full survey data is shown below:
The data in this table is compounded as someone willing to travel 100 miles would also travel 75, 50 and 10. Contact us if you would like the uncompounded data. 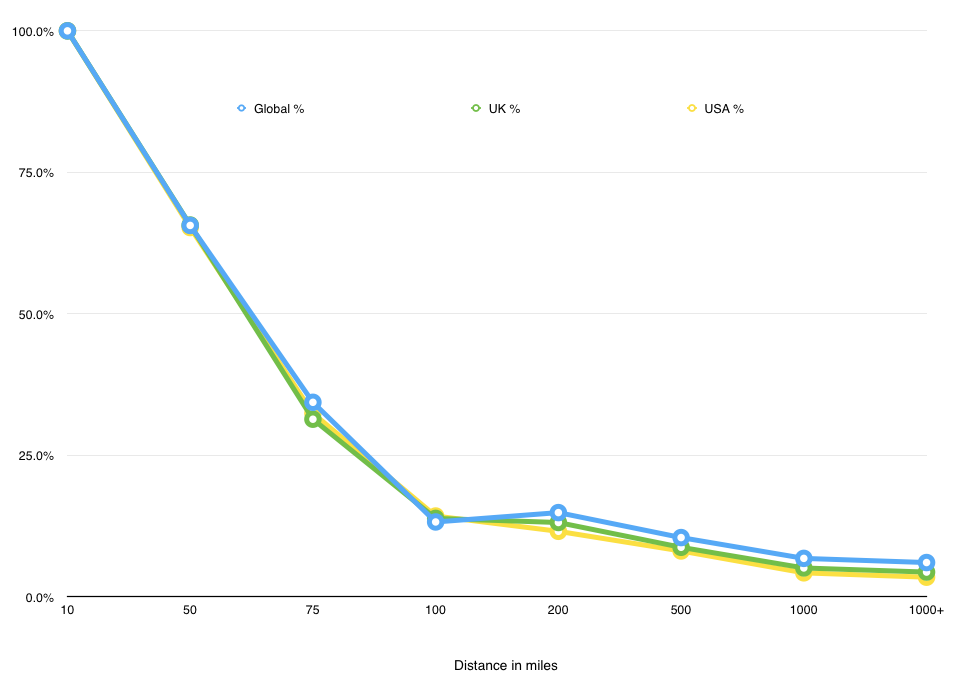 You're welcome to use any data on this page, including the infographics within your own articles. Please link back to this article as a courtesy.
Share this article